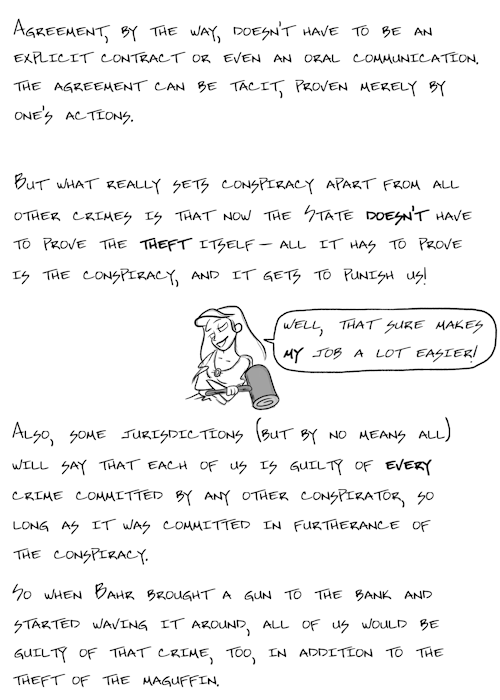 The Illustrated Guide to Criminal Law
Chapter 10: We’ll All Go Down Together
Conspiracy pg 26: It Really Doesn’t Take Much

Agreement, by the way, doesn’t have to be an explicit contract or even an oral communication. The agreement can be tacit, proven merely by one’s actions.

[SUGGESTED EDIT: Why not a picture of a Mafia Don nodding to a hit man, who then kills someone?]

But what really sets Conspiracy apart from all other crimes is that now the State doesn’t have to prove the theft itself⁠—all it has to prove is the conspiracy, and it gets to punish us!

Well, that sure makes my job a lot easier!

Also, some jurisdictions (but by no means all) will say that each of us is guilty of every crime committed by any other conspirator, so long as it was committed in furtherance of the conspiracy.

So when Bahr brought a gun to the bank and started waving it around, all of us would be guilty of that crime, too, in addition to the theft of the Maguffin.

Join the conversation!
There are now 7 comments... what are your thoughts?